BATTLE'S STORY
The Battle of Tarawa

The Battle of Tarawa was fought from November 20 to the 23, 1943 at the Tarawa atoll on Betio Island, which is a part of the larger Gilbert Island chain located in the Pacific Ocean between Hawaii and Papua New Guinea. The battle was a part of the larger “Operation Galvanic” which aimed to invade the entirety of the Japanese held Gilbert Islands. The battle was the first in the Pacific region in which the Americans were on the offensive and would be the first time their amphibious landing on an island would be heavily opposed.  Previously, American troops were able to land on islands with little opposition, but this would not be the case at Tarawa. What was supposed to be a quick victory would turn into a bloody 76-hour slog that left almost 1,700 Americans dead.

The United States sent 18,000 Marines to the island of Betio, expecting Japanese forces on the island to be defeated quickly. However, problems quickly arose that made a speedy victory impossible for American troops. Low tides caused most of the American landing crafts to get stuck on the coral reefs surrounding the island, forcing troops to attempt to dislodge them. Stuck in one spot, Marines on the landing crafts were extremely vulnerable to the Japanese gunners on the island. Instead of continuing to try and move the boats, the Marines opted to wade through the chest-deep water to get to the island, despite the heavy fire Japanese troops were raining down on them. The Japanese Imperial Army had heavily fortified Tarawa with an extensive trench system, tanks, coastal guns, anti-aircraft guns, and pillboxes (concrete bunkers). American troops who were able to make it to shore were faced with serious opposition and could not communicate anything back to those off of Tarawa, as their radio equipment was rendered useless from water damage. The landing path became extremely congested with boats stuck on the reef and bodies of soldiers who had died trying to wade to shore, making it even more difficult for reinforcements to come in. By the end of the first day, only 5,000 Marines had made it to the island, and 1,500 had died trying.

The next day the low tide again caused difficulty for American landing attempts, forcing more Marines to wade towards the shore. Around noon the tides finally began to rise, allowing landing craft to get close to the shore and protect the Marines while they got to the island. Reinforcements and armaments finally made it to shore as well, allowing the Americans to properly begin the offensive on the island itself. American troops quickly moved through Tarawa, taking out enemy fortifications on the island. This continued through to the third and final day of the battle, when it became clear to the Japanese troops left on the island that they were in a dire position. The remaining Japanese troops launched a desperate banzai attack, where they rushed toward the American troops and prepared to fight to the last man. Almost all of the Japanese soldiers fought to the death, and of the nearly 3,000 Japanese initially on the island, only 17 survived. Once the banzai attack was over, Betio was declared as secured and as an American victory.

Almost 2,000 American troops were lost at the Battle of Tarawa, with another 2,000 wounded. The lessons learned at the Battle of Tarawa would be important for future American amphibious landings. Better equipment, such as waterproof radios, and improved strategy would be developed to avoid another landing with such heavy casualties in such a short period of time. This would lead to the founding of Underwater Demolition Teams that would be tasked with clearing paths for amphibious landings. Eventually, these teams would morph into the present-day U.S. Navy SEALS. Since 2007, nonprofit organizations have traveled to Tarawa to recover remains of American servicemen whose bodies were left at there, and over 60 sets of remains have been located and repatriated to the United States.

The National WII Museum: The Battle of Tarawa

John Wukovits, One Square Mile of Hell: The Battle for Tarawa (Penguin, 2007). 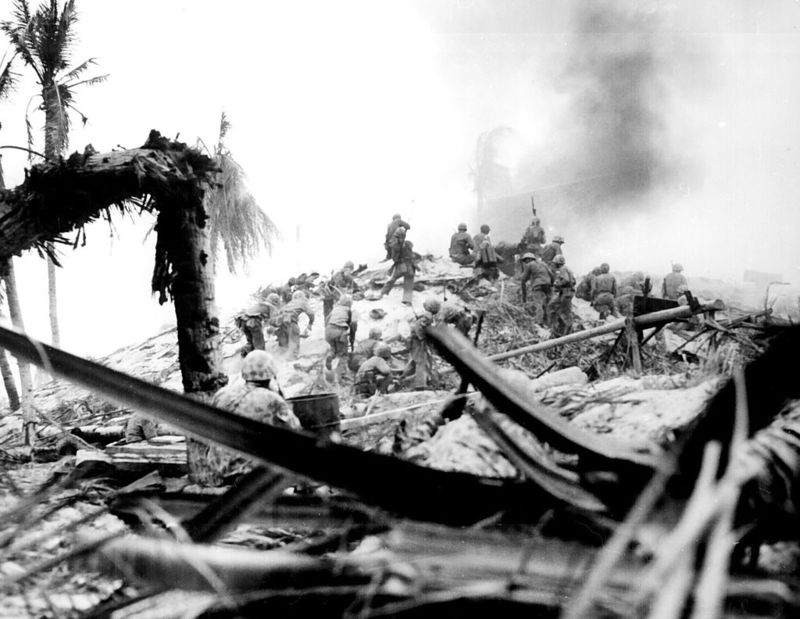