BATTLE'S STORY
The Battle of Saipan

The Battle of Saipan took place from June 15 to July 9, 1944. The island of Saipan is the largest island of the Northern Mariana Island chain and only 1,500 miles from Japan. American forces sought to take  Saipan from the Japanese occupying it in order to establish an airbase on the island from where they could launch B-29 bomber attacks on the Japanese home islands . The resulting battle was brutal, with heavy losses of American soldiers, Japanese soldiers, and Japanese civilians residing on the island. After prolonged and bloody fighting, American troops were successful in taking the island, raising an American flag over Saipan.

By the spring of 1944, the United States had successfully taken the Marshall Islands on their path towards Japan. It was clear that the next step was to take the Mariana Islands to continue to encroach on the Japanese home islands. By taking the Mariana Islands, the U.S. would be able to cut off Japan’s home islands from crucial supplies coming from its empire in the South Pacific. Saipan was the closest of the islands to Japan, making it an ideal place to launch air strikes. Thus, it was decided that Saipan would be the first island in the Mariana’s that the Americans would land on. American military planners expected Saipan to be taken in three days, but they had inaccurately assessed Japanese forces on the island. The approximately 30,000 Japanese troops on the island would put up a formidable fight against the US forces.

Early in the morning of June 15, American transport ships congregated on the southwest coast of Saipan and sent  Marines out on amphibious landing vehicles to begin making their way to the island’s shores. American battleships and destroyers bombarded the shores in an attempt to hit Japanese targets on the islands and to provide cover for the landing Marines. However, many of the bombs missed their targets and landed amongst the  Marines coming to shore. The beach was in chaos as Marines ran and bombs exploded everywhere. Despite these hardships, however, 8,000 Marines safely made it to shore that morning, and a total of 20,000 established a beachhead by the end of the day. Army reinforcements joined the Marines the next day, and the American troops began to push inland. The Japanese army retreated to the highest point on Saipan, Mount Tapotchau, standing at 1,550 feet high at the center of the island. The high ground gave the Japanese a serious advantage in the fighting as they could simply fire straight down at approaching American troops. Some of the most brutal fighting took place in “Death Valley”, a valley with a ridge, dubbed “Purple Heart Ridge”, directly above it where well-armed and protected Japanese soldiers constantly fired on Americans. Nevertheless, American soldiers kept pushing up the mountain and pushing back the Japanese. By the end of June, American forces took Mount Tapotchau, forcing the Japanese to retreat north and all but guaranteeing an American victory.

The remaining Japanese forces on the Island had nowhere to go as they were overpowered and essentially surrounded by the Americans from land, air, and sea.  The Japanese general in command on Saipan committed ritual suicide once he realized all was lost. Shortly before his death, however, the general ordered his troops to execute a banzai attack, an all-out, fight to the death surprise ambush. On the morning of July 6, around 4,000 Japanese soldiers charged the American lines in the largest banzai attack of the war. The banzai attack killed or wounded around 1,000 American soldiers before being stopped by heavy machine gun fire. Most of the Japanese soldiers fought to their death, meaning that once the banzai attack ended, the battle did as well. On July 9, the Americans declared victory over Saipan.

The American victory in Saipan terrified the Japanese civilians living there, as propaganda from their home country led them to believe the American troops would brutally murder them. Operating under this assumption, over 1,000 civilians jumped off of cliffs on the north end of the island that would become known as “suicide cliff” and “banzai cliff”, as they were encouraged to do so by a radio broadcast from the Emperor. The American victory also proved disastrous for Japan’s Prime Minister, who had promised Saipan would never be taken by the Americans, leading to his resignation a week after the battle ended. Saipan was the first of Japan’s holdings taken by the Americans that had not been acquired by Japanese invasions in 1941-1942, as Saipan had been under Japanese control since 1920. Finally, U.S. bombers would make use of the Island to stage attacks on Japan, inflicting heavy damage on the home islands. Saipan was crucial to the Pacific offensive, as it opened a path to Japan and severely damaged Japanese morale in both the civilian and political realm.

CNN: Scenes from the Battle of Saipan

Harold Goldberg, D-Day in the Pacific: The Battle of Saipan (Indiana University Press, 2007).

History: The Battle of Saipan 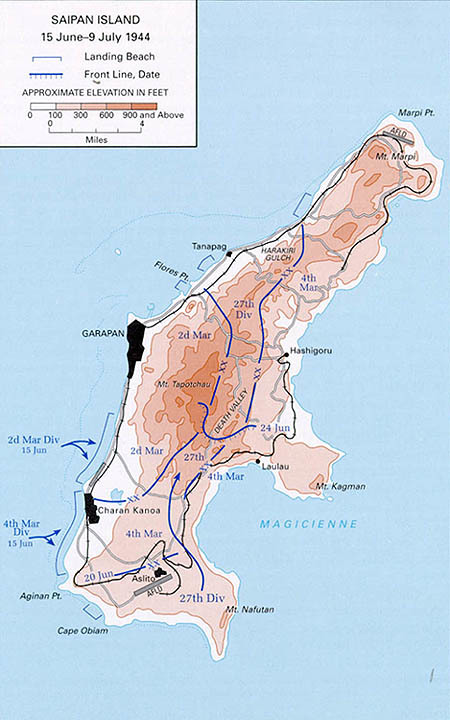