BATTLE'S STORY
The Battle of Peleliu

The Battle of Peleliu, also known as Operation Stalemate II, took place from September 15 to November 27, 1944. The battle was fought between American troops and the Japanese Imperial Army on the island of Peleliu, which is a part of the Palau archipelago in Micronesia. The island had an important airstrip which U.S. forces aimed to capture. American military leaders predicted the attack would only take a couple of days to complete, but in reality, the attack took several weeks. Although this battle ended in an American victory, it had the highest death toll than any other amphibious assault in American history.

U.S. forces successfully gained control of the Marshall Islands, Saipan, Tinian, and Guam by late August of 1944, and their next target was Palau and the island of Peleliu. Peleliu is a small volcanic island, just six miles long and two miles wide. The airstrip on the island being held by the Japanese posed a threat to Allied plans to retake the Philippines, due to the proximity of the two islands. Therefore, General Douglas MacArthur advocated for an attack on the island in order to take the airfield. On September 15, American Marines landed on the island using the same landing techniques that had consistently worked for them. The Japanese, however, had devised a different method of defense against American naval landings, as they had grown accustomed to the American method. The island of Peleliu had an extensive network of caves which the Japanese connected with various tunnels. This allowed Japanese troops to have significant cover during attacks and to emerge only when necessary. It took four days for American forces to secure the southwest portion of the island before turning northward. The Japanese forces on Umurbrogol Mountain, nicknamed “Bloody Nose Ridge,” inflicted serious damage on American forces. It took many days and a good amount of reinforcements for the Americans to finally take “Bloody Nose Ridge” on November 25. Most of the remaining Japanese soldiers refused to surrender; as a result, most were killed or committed suicide, with only around 20 being taken as prisoners of war. The Americans suffered heavy losses at Peleliu, with 10,786 casualties making it one of the costliest battles in the Pacific Theater.

The capture of Peleliu aided in General MacArthur’s plan to retake the Philippines and brought the United States one step closer to being able to threaten the Japanese home islands. However, the great number of casualties suffered at the battle make it a controversial one, as critics questioned why reinforcements were not sent sooner and if the battle was even necessary at all. However, Peleliu did serve as an important lesson for American military commanders, and allowed them to better prepare for Japanese attack strategies going forward. This information and planning would prove essential at both the Battle of Iwo Jima and Okinawa.

Derrick Wright, To the Far Side of Hell: The Battle for Peleliu, 1944 (University of Alabama Press, 2005) 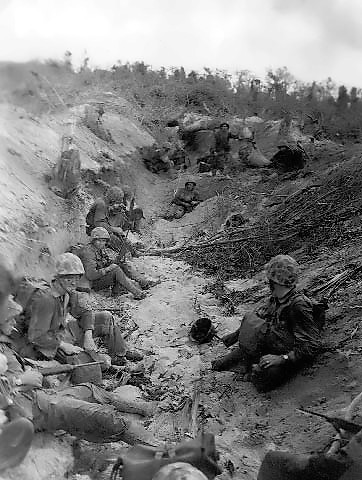