The Battle of Monte Cassino lasted for 123 days, from January 17 to May 18, 1944. The battle was fought between the Allied Powers and Germany near Rome, Italy. Monte Cassino itself is a rocky hill southeast of Rome in the town of Cassino, which was at the center of the German Gustav line. The Gustav line was a German defensive line which spanned Italy and was extremely difficult for the Allies to break. The Allies launched multiple offenses toward this end at Monte Cassino and finally succeeded on their fourth attempt, as Polish troops captured the hill.

Atop Monte Cassino was the historic Monte Cassino abbey, which was 1,400 years old. Both the Germans and the Allies had promised the Vatican that the abbey would not be used for military purposes or be targeted in the fighting. However, due to the accuracy of German artillery attacks, the Allies concluded the Germans were using the abbey as an observation post. Although they did not have decisive evidence, they were desperate to stop the attacks, and on February 15, American bombers targeted the abbey and destroyed it. This ultimately worked to their disadvantage, as German troops then used the wreckage as cover. The fighting continued as the Allies launched four different attacks, creating one of the longest and most violent battles of the Italian Campaign.

The fourth attack launched by the Allies, known as Operation Diadem, finally brought victory to the Allied troops. The object was to both break the Gustav line to get to Rome and to tie down German forces in Italy, thereby preventing them from moving to Normandy where the D-Day invasion would soon take place. On May 11-12, the offensive began with heavy artillery fire and separate Allied divisions moving toward securing distinct objectives. British, Indian, and Canadian forces broke through German lines in the Liri Valley, while American and French troops moved through the coast and mountains respectively. At the same time, Polish troops attacked Monte Cassino directly. Intense fighting ensued; eventually, however, German forces fell back to the Hitler line, a secondary defensive line further back, allowing Allied troops to take Cassino. On May 18, Polish troops climbed to the summit of Monte Cassino, and, despite their exhaustion from battle, managed to raise a Polish flag on the ruins.

The battle of Monte Cassino had two major outcomes, as it cleared a way to Rome for the Allied forces and finally broke the formidable Gustav line. These important events acted as the catalyst to the eventual end of the German occupation of Italy. And yet, these events were not without their drawbacks, as the loss of the abbey and heavy casualties were devastating. The Allies suffered 55,000 casualties, while the Germans lost 20,000 men. In the end, however, the Allies successfully liberated Italy in April of 1945. 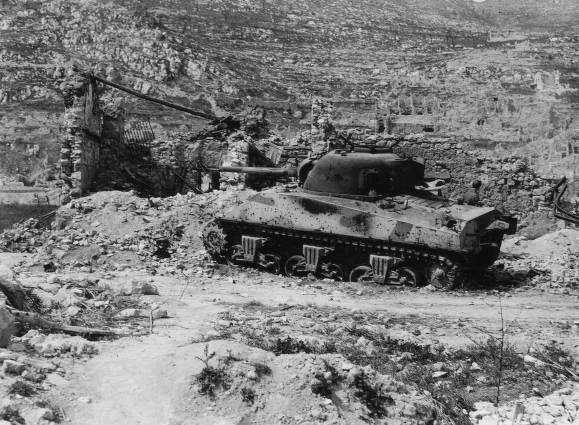