BATTLE'S STORY
The Battle of Manila

The Battle of Manila lasted exactly one month, from February 3 to March 3, 1945. The battle was incredibly destructive and violent, reducing Manila, the capital of the Philippines, to rubble. The conflict involved some of the worst fighting that occurred in an urban area of the Pacific Theater, leaving over 100,000 civilians dead. The battle marked the end of the Japanese occupation of the Philippines and the success of General Douglas MacArthur’s objective to retake the islands.

In the days leading up to the battle, U.S. forces began to encroach upon Manila from a variety of different directions. The Japanese troops had gone north in order to engage U.S. troops in Luzon instead of Manila. The Japanese commander ordered that the city of Manila be evacuated, as he did not believe he could both successfully defend the city and feed its one million residents. However, a Japanese naval commander ignored these orders and decided to fight to keep Manila. Military leaders back on the home islands of Japan favored the naval commander’s plan to try and defend the city and gave the go ahead to move forward with it. However, trying to keep Manila created a dire situation for the Japanese. They were essentially guaranteed a violent fight to the death, as it was extremely unlikely they would emerge victorious. Awareness of the unlikely odds of victory amongst Japanese troops created a desperate mindset that would lead to atrocities down the line in Manila.

As U.S. forces moved closer to Manila, they made quick work of securing the bridges that would lead them into the main city, eventually encircling Japanese forces. On the first day of fighting, U.S. forces liberated the Santo Tomas internment camp, where some civilians and American Army and Navy nurses were being held. On the second day, more than 1,000 prisoners of war being held at the Bilibid Prison were freed by American forces. General MacArthur, eager to generate positive publicity, announced to the American people that Manila had fallen on February 6, but the fighting was far from over. The following days consisted of bitter fighting in which the American forces consistently pushed back the Japanese forces, although at a considerable civilian cost. Although initially MacArthur had tried to protect the city and its inhabitants by limiting airplane bombings and artillery fire, the fires from collapsing buildings and crossfire from both sides led to some civilian causalities. Civilians suffered greatly at the hands of Japanese soldiers in what would eventually become known as the Manila Massacre, where deeply frustrated Japanese soldiers murdered, raped, and mutilated Filipino civilians who remained in the city. The atrocities committed by these Japanese troops were horrific, and their commander would later be convicted and executed for war crimes as a result.

By late February, only a few buildings in the city remained under Japanese control. The remaining Japanese officers committed ritual suicide, or Seppuku, on February 26, and all of the remaining Japanese holdings were quickly taken over by American forces in the following days. Manila was almost entirely destroyed as a result of the fighting, taking with it important artifacts and buildings of cultural and historical significance to the Filipino people. Once known as the “Pearl of the Orient,” Manila was now full of trauma and wreckage. Still, the battle was a pivotal victory in the American effort to retake Japanese holdings in the Pacific.

History Net: The Battle of Manila 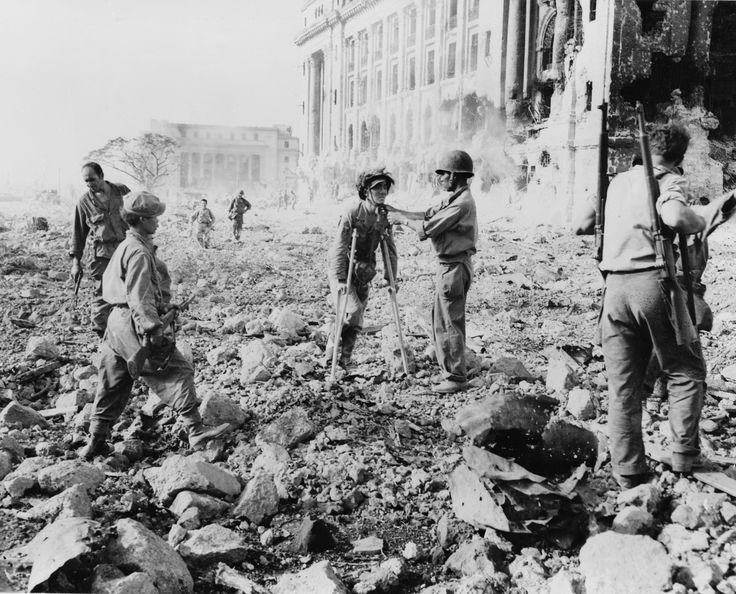