BATTLE'S STORY
The Battle of Attu

The Battle of Attu took place from May 11 to May 30, 1943. In June 1942, Japan captured Attu, a mostly uninhabited island part of Alaska’s Aleutian chain, as well as Kiska, another Aleutian island close by. The islands were constantly rainy, foggy, and windy with icy and rocky terrain, so Japan had not taken hold of them for any serious tactical purpose. It was most likely a strategic move, either to draw U.S. attention away from the South Pacific or to try and prevent the U.S. from using the Aleutians to stage an attack on mainland Japan. The fact that the Japanese took hold of any U.S. territory was deeply troubling to U.S. military leaders, as they feared Japan would encroach deeper into the northern United States. The U.S. sought to retake the islands in “Operation Landgrab,” making the battle of Attu the only battle of WWII fought in North America.

For some time after the Japanese took control of the two islands, the U.S. mostly ignored the Japanese presence, despite being concerned about the occupation. On March 26, 1943, during the Battle of the Komandorski islands in the Bering Sea, the U.S. was able to clear a path to attack and recapture the occupied islands as the threat of Japanese attacks had been neutralized in the area. On May 11, 11,000 U.S. troops landed on both the North and South ends of the island, greatly disadvantaging the Japanese. However, Japanese troops moved up into the mountains of the islands and were acclimated to the conditions of the island, giving them significant protection from U.S. troops. Freezing temperatures and exposure inflicted more damage on U.S. troops than the Japanese did. Anticipating a short battle, U.S. troops were unprepared for the weather conditions, causing many to die or to suffer from the effects of exposure.

Things began to look up for the U.S. forces, as naval and aerial support, reinforcements, and more supplies came to their aid a week or so into the fighting. U.S. forces began gaining ground and eventually trapped the Japanese forces on a small hillside with no escape route. With their fate looking extremely bleak, the remaining Japanese felt their only options to be surrender or fight until the last man. However, many did not see surrender as an option. Japanese cultural traditions include the idea of Bushidō or “way of the warrior”.This is the code of conduct that was followed by the Samurai, and many Japanese soldiers in WWII sought to follow its tenets, including that surrender is not an option and was the ultimate dishonor. Instead of conceding to the U.S., the remaining Japanese troops charged the American infantry units in what is known as a  Banzai attack, this particular Banzai attack was one of the largest in WWII. Although the attack broke through American lines initially, the Japanese forces were eventually brutally defeated. Many of the Japanese men who did not die in the fighting committed suicide rather than be taken prisoner. Of the 2,600 Japanese men who were on Attu, only 28 survived.

The Battle of Attu was a success for the United States as they were able to reclaim their home territory. The significance of the victory is largely forgotten, however, as scholars and the public tend to pay more attention to battles in the South Pacific. Nonetheless, the Battle of Attu was important in boosting American morale. The battle still has impacts felt today, as 2,351 Japanese soldiers were buried in a mass grave on the island. Families of the soldiers have requested that the United States return the soldiers’ remains so that they may be properly buried, but this issue remains unresolved. 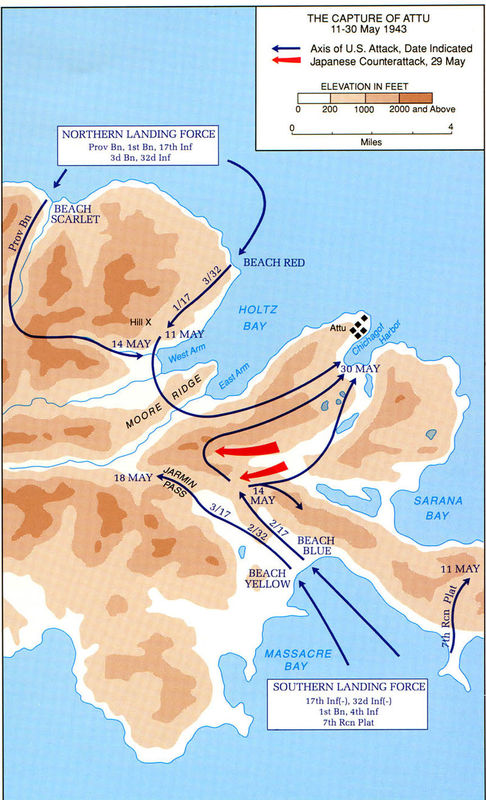