BATTLE'S STORY
The Battle of Aachen

The Battle of Aachen took place from October 2-21, 1944 in Aachen, Germany. Aachen is a city in western Germany, not far from the borders of Belgium and the Netherlands. The battle would be the longest city conflict for the Allies fighting on the western front, lasting for nineteen days. This city was of little military value, but the Allies needed to pass through it in order to reach more industrialized and tactically important areas of Germany. The Allies’ victory at Aachen, however, was still a significant one, as it demonstrated to the troops that their hard work moving through France was paying off. After months of struggling to push forward, the Allies were finally moving in on the Third Reich and having success in doing so.

Allied forces finally reached the western German border by September 1944 after an arduous slog through France. The border was protected by the Siegfried Line, a heavily fortified German defensive line that stretched 390 miles across Germany’s borders with the Netherlands, Belgium, and Switzerland. As the Allies approached the Siegfried Line, they discovered that it was heavily reinforced with tanks and soldiers trying to repel Allied movements into Germany. The American troops were split up to take on the Germans from different points in order to weaken the line. General Courtney Hodges and his First Army were tasked with breaking through the line near Aachen. As a result, Aachen was the first German city to be attacked by a foreign army in WWII. The taking of the city itself did not have many material benefits to the Allies. Yet, Aachen was the ancient seat of the Carolingian empire, which the Germans considered to be the site of the First Reich, thereby giving its capture  symbolic significance.

Aachen was heavily protected, with barbed wire, pillboxes, and obstacles to block tanks from moving forward. At some sections of the defensive line, the obstacles continued for 10 long miles. The city itself was also difficult to navigate as it was filled with narrow streets, leaving American troops extremely vulnerable to enemy fire. To avoid this, the American troops instead worked to surround the city. Fighting began as U.S. forces bombarded German defenses and attempted to take out as many pillboxes as possible by throwing hand grenades inside them. The Americans were picking up ground steadily when the Germans launched a counterattack, attempting to coordinate their air and tank power. However, the Americans were able to defeat the attack decisively, thanks to their superior tanks and their ability to easily fight off the German troops. American forces continued to move in on all sides and had Aachen surrounded by October 11. U.S. generals ordered the Germans to surrender or face destruction, but the Germans refused. As a result, the city was bombed heavily,  destroying much of Aachen’s buildings and infrastructure.

The U.S. forces then began advancing towards the center of the city, resulting in some of the most violent fighting Aachen had seen. Initially, the American regiments were struggling to meet up with one another in the city center, leaving them stuck on the perimeters and vulnerable to enemy attacks. As a result, the American 26th regiment took on the task of taking the city instead. This regiment was made up of troops with more experience who were aided by several tanks. Eventually the regiment was able to take out most of the German forces, leaving only a few who were defending a single hotel in the city center. The fighting continued on, but eventually U.S. air forces, artillery support, and reinforcements helped in finally ending the battle and successfully taking the city.

The Battle of Aachen left both sides with severe casualties, as both the Americans and Germans ended the fight with 5,000 apiece. The American success at Aachen opened the door for the Allies to move deeper into Germany, as the Siegfried Line had finally been pierced. The battle also boosted the morale of the American soldiers, who felt that they were finally getting closer and closer to the true enemy. Yet the fighting was far from over in Germany, as the Allies would soon face more hard-fought battles throughout the conflict-worn regions of the crumbling Third Reich.

History Hit: The Battle of Aachen

The National WWII Museum: The Battle of Aachen 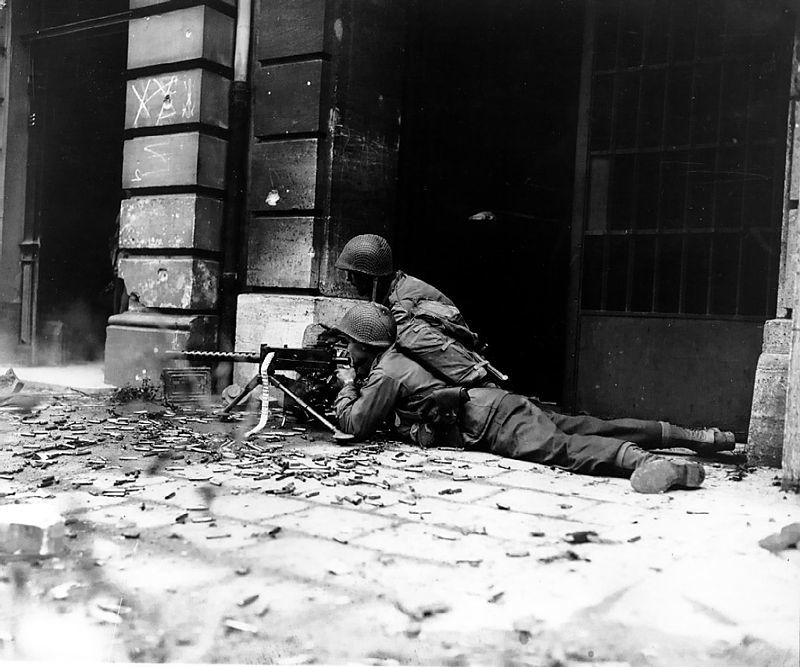