BATTLE'S STORY
The Atomic Bombings of Hiroshima and Nagasaki

The United States government began research and development on an atomic bomb after the discovery of nuclear fission, which entailed the splitting of a uranium atom resulting in the creation of energy, and learning that this fission could create a chain reaction. These discoveries resulted in the creation of the Manhattan Project in 1942, where scientists and military personnel worked together to create an atomic bomb. As it became clear that the project would be successful in creating an atomic weapon, a committee was formed by the Secretary of War to decide on how the bomb would be used. On June 16, 1945, the committee recommended that the United States should bomb the home islands of Japan in hopes that it would bring an end to the war.

On May 8, 1945, the Allies accepted the formal surrender of Nazi forces, meaning the Allies had achieved victory in Europe. Despite this and the fact they were on the verge of defeat, Japan proclaimed they would not surrender. This left the United States with limited options, the main two being an invasion of the home islands of Japan or the dropping of an atomic bomb on the country, which would cause destruction and death at such a large scale that Japan would surrender. The decision had to be made by President Truman, who had only been in office for a couple of months, taking up the position after President Roosevelt’s death on April 12, 1945. Military advisors informed Truman that a successful invasion of Japan was possible, but it would most likely result in up to 1 million additional U.S. casualties. Although several of his advisors, such as the Secretary of War and General Dwight Eisenhower, were not convinced the bomb was the right decision, Truman opted to drop the bomb to avoid more American casualties and hopefully end the war quicker.

Hiroshima, a military manufacturing center at the southern end of Japan, was chosen as the target for the bombing. Hiroshima was an important base for communications and logistics in Japan, thus destroying it would be a heavy blow to Japanese military operations. At 8:15am on August 6 a B-29 bomber, modified specially to carry the 9,000-pound uranium bomb and named the Enola Gay after the pilot’s mother, dropped the bomb named “Little Boy”  on Hiroshima. The explosion destroyed five square miles of the city immediately. Anywhere between 90,000 to 166,000 people are thought to have died as a result of the bomb in the four-month period following its explosion. From the day it dropped to five years afterwards, it is believed that 200,000 people died from both the explosion itself and the radioactive exposure it caused. Despite the intense destruction and gruesome casualties by the atomic bomb,Japan still refused to surrender.

Three days after the bomb was dropped on Hiroshima, another modified B-29 bomber took off from the Island of Tinian in the South Pacific with the intention of dropping an atomic bomb. The initial target was the city of Kokura, 100 miles south of Hiroshima, but heavy clouds diverted the pilot to the secondary target of Nagasaki, which was another 100 miles south. At 11:52am the second atomic bomb named “Fat Man” and weighing 10,000 pounds was dropped on Nagasaki. Somewhere between 40,000 and 75,000 people died immediately from the bomb’s explosion, with around 60,000 sustaining serious injuries. By the end of 1945, it is estimated that a total of 80,000 people died due to the atomic bombing of Nagasaki. On August 15, 1945 at 12:00pm, Emperor Hirohito of Japan broadcasted live on the radio that Japan was surrendering to the Allies.

Critics debate over whether or not dropping the bombs was the right decision still to this day, as the death and destruction they brought on to civilians was extreme. The impact of the bombings would be felt for years to come, as radiation sickness tormented many Japanese civilians who thought they were lucky enough to survive the initial attacks. Those who support the decision to drop the bombs often cite it as a necessary evil to end the war and that it saved many American soldiers from dying in an invasion of Japan. Ultimately, there is no question that the use of the atomic bombs changed the face of warfare forever, not only because of the creation of nuclear weapons, but also through their eventual spread throughout the world, as more countries developed and acquired these weapons of mass destruction.

History: The Bombings of Hiroshima and Nagasaki 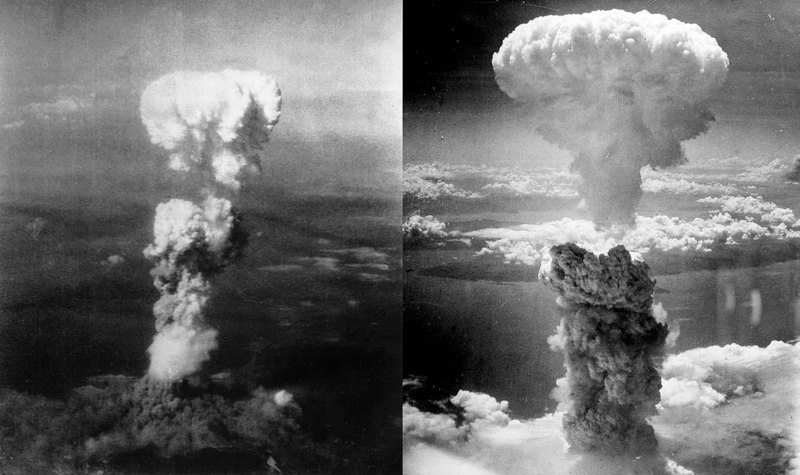