Island hopping, also known as leapfrogging, was a strategy used by the Allies in the Pacific Campaign against the Japanese Imperial Army. After the attack on Pearl Harbor, American naval resources were limited, and it was clear that trying to attack Japan head on would lead to a quick defeat. Instead, the Allies devised a plan to avoid the most heavily fortified Japanese positions and focus on the smaller islands that would still give them an upper hand in positioning themselves to threaten the Japanese home islands. Thus, while moving through the Pacific Theater, the Allies would periodically skip over an island if it was a Japanese stronghold. Although the Allies avoided direct contact with the strongest islands held by the Japanese, they were still able to render some useless by cutting the supply lines which ran through the smaller islands. By not capturing every single Japanese island on the way towards the home islands, the Allies preserved supplies and manpower by moving quickly and efficiently. The strategy was divided into a two-pronged approach, with two officials overseeing each group(?). Admiral Chester Nimitz lead the island hopping campaign north towards the Bonin Islands, which would bring U.S. troops in close proximity to Japan itself. The second group was led by General Douglas MacArthur, who was headed south towards the Philippines to fulfill his promise of returning there after the  Japanese had invaded. The strategy was successful in allowing the Allies to work with limited resources and avoid unneeded altercations. In the end, the Island hopping strategy led U.S. forces to victory in defeating the Japanese. 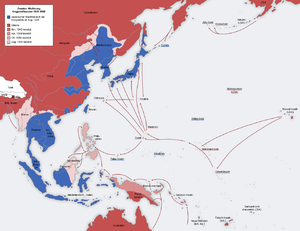