The Guadalcanal Campaign, also known as the Battle of Guadalcanal and codenamed Operation Watchtower by American forces, was a military campaign fought between 7 August 1942 and 9 February 1943 on and around the island of Guadalcanal in the Pacific theater of World War II. It was the first major offensive by Allied forces against the Empire of Japan.

On 7 August 1942, Allied forces, predominantly United States Marines, landed on Guadalcanal, Tulagi, and Florida in the southern Solomon Islands, with the objective of denying their use by the Japanese to threaten Allied supply and communication routes between the United States, Australia, and New Zealand; powerful American and Australian naval forces supported these landings.

The Allies also intended to use Guadalcanal and Tulagi as bases in supporting a campaign to eventually capture or neutralize the major Japanese base at Rabaul on New Britain. The Japanese defenders, who had occupied those islands since May 1942, were outnumbered and overwhelmed by the Allies, who captured Tulagi and Florida, as well as the airfield – later named Henderson Field – that was under construction on Guadalcanal.

Surprised by the Allied offensive, the Japanese made several attempts between August and November to retake Henderson Field. Three major land battles, seven large naval battles (five nighttime surface actions and two carrier battles), and almost daily aerial battles culminated in the decisive Naval Battle of Guadalcanal in early November, with the defeat of the last Japanese attempt to bombard Henderson Field from the sea and to land with enough troops to retake it. In December, the Japanese abandoned their efforts to retake Guadalcanal, and evacuated their remaining forces by 7 February 1943, in the face of an offensive by the U.S. Army's XIV Corps.

The Guadalcanal campaign was a significant strategic Allied combined-arms victory in the Pacific theater. While the Battle of Midway was a crushing defeat of the Imperial Japanese Navy, it did not stop Japanese offensives, which continued both at sea and on the ground.[11] The victories at Milne Bay, Buna–Gona, and Guadalcanal marked the Allied transition from defensive operations to the strategic initiative in the theater, leading to offensive campaigns in the Solomon Islands, New Guinea, and the Central Pacific, which resulted in the surrender of Japan, ending World War II. 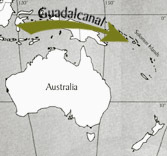